The following except is from the ODNR Ohio State Parks Magazine – Spring/Summer 2000
In its original form, Indian Lake was a conglomeration of shallow natural lakes and marshes covering 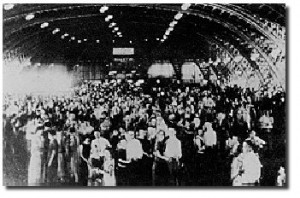 640 acres in the northwest corner of Logan County. A bulkhead was built on the Great Miami River inballroom the 1850s to enlarge and deepen the lake area to create a water supply for the new Miami Canal. The work was completed in 1860 and the resulting Lewistown Reservoir covered more than 6,000 acres with 29 miles of shoreline. At the turn of the century, railroads had come into vogue and the canals were abandoned for more efficient transportation. No longer needed for canal commerce, Lewistown Reservoir was designated by the Ohio General Assembly in 1898 as a public recreation area known by its historic name, Indian Lake. Indian Lake quickly became a popular resort area with its numerous islands and untamed shoreline touted as a secluded wilderness paradise offering supreme hunting, shooting and relaxation.
In the early 1900s, Indian Lake became a leading destination to exercise the intellect as well as the body. The traveling Chautauqua Assemblies that swept the East and Midwest came to Indian Lake’s Orchard Island starting in 1910. These variety shows featured lectures and programs by a diverse roster of speakers and entertainers, including some famous and prominent figures such as the great orator William Jennings Bryant. Chautauqua drew such large crowds that a hotel and cottages were built on the island to accommodate out-of-town guests for the two-week gatherings in late July and early August. The village of Lakeview became a regularly scheduled stop in 1911 on the Toledo and Ohio Central Railroad, and the Ohio Electric Line provided service to the burgeoning lakeside community known as Russells Point. The rail lines provided easy access to rural Indian Lake park from Lima, Columbus, Dayton and neighboring communities.

With so much to attract visitors to the area by the early 1920s, local businessman Pappy Wilgus saw anballroom opportunity he couldn’t resist. Pappy and his son, French, built the Sandy Beach Amusement Park at Russells Point to entertain the growing numbers of tourists. Sandy Beach Amusement Park opened on Decoration Day, 1924. The highlight of the park was the fabulous Minnewawa Dance Hall, billed as the best and largest in Ohio, featuring two bandstands and room for hundreds of couples. The Minnewawa drew all the most popular touring performers of the day, including the Rudy Vallee and Paul Whiteman orchestras. The park also offered all of the favorite amusement rides including a roller coaster, merry-go-round, ferris wheel, Blue Beard’s castle, and Custer’s car ride, along with a penny arcade, fun house, boat excursions and food concessions. One of the more unique attractions was the Old Mill Shoot, in which boat-like cars plunged down a roller coaster hill into a tank of water, soaking all aboard. A boardwalk spanned the lake to give swimmers access to nearby Sandy Beach Island, a popular bathing area offering slides and diving towers.

As the “Roaring 20s” gave way to the Great Depression of the 1930s, “Ohio’s Million Dollar Playground” at Indian Lake lost none of its currency. Couples still crowded the amusement park for dance marathons which rewarded the most persistent couples with coveted cash prizes. The winners of the 1931 National

Endurance Dance Marathon held at the park reputedly danced for an astounding 1,922 hours! Sandy Beach Amusement Park’s future looked rosy, but a disastrous fire in 1935 completely destroyed the Minnewawa dance hall, along with the wooden structures of the Old Mill Shoot, Custer Cars, Spa bathhouse and part of the roller coaster. A new park operator pumped $100,000 into improvements in 1936, took over management of most of the concessions, and rebuilt the dance hall in an open-air garden style. The most famous Big Bands booked the elegant new Moonlight Terrace Gardens at Sandy Beach Amusement Park in their tours. The bands played on, and twirling couples continued to dance until the early 1950s.

Indian Lake was officially designated as one of the original Ohio State Parks under the jurisdiction of the new Ohio Department of Natural Resources in 1949. The original park office was located in Russells amusement-parkPoint, close to the hub of activity at the amusement park. The 1950s were a successful decade for both Sandy Beach Amusement Park and the new state park, as well as local business people who provided services to tourists. The celebration of Ohio’s sesquicentennial in 1953 was a huge event at the lake, drawing crowds estimated at 100,000. These untroubled glory days couldn’t last, however. The societal turmoil of the 1960s came to Indian Lake to pay annual visits starting July 4, 1961. Late that evening, rowdy patrons at the bars across the street from the amusement park sparked a riot that involved nearly 500 youths. The July 4th riot became an unfortunate tradition that plagued the community for a decade as the riots grew increasingly large and destructive each year. The riots dampened everyone’s business during what should be one of the busiest weeks of the year.

Indian Lake State Park’s family campground was built in the mid-1960s across the lake from Russells Point and the amusement park. The class-A campground was an immediate hit, and it brought a new audience to the area. Meanwhile, the quaint, old-fashioned Sandy Beach Amusement Park was renamed Indian Lake Playland in 1967, and it continued the struggle to compete with northwest Ohio’s immensely popular new theme park, Cedar Point, for nearly a decade. Indian Lake Playland did not reopen on Decoration Day 1976, and a few years later, the rides and concessions were torn down.